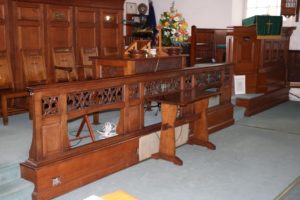 Kingsthorpe Baptist Church was founded in 1823 by members from Carey Baptist, Moulton and College Street Baptist in Northampton.  The Chapel, which was built in 1835 stands in the High Street of the village of Kingsthorpe.  It is built of local ironstone and is a Grade 2 listed building.

In 1872 the site next to the chapel was purchased for the provision of better Sunday School accommodation and opened in December 1881.

Just after the settlement in 1892 of the Rev G W Robert, a scheme to enlarge and “beautify” the chapel was completed.  The main building was carried back about twice it’s original length, and an entrance porch of Duston stone was built.  The interior was reseated with pitch pine pews, a new rostrum and new floor of wood blocks completed the alterations.

In 1909 a large upstairs lecture room now called the “Primary”, with vestry and two large classrooms below was built.

When the Great War broke out in 1914, the Church took responsibility of entertaining some Belgian refugees.

In 1930 it was proposed to purchase building land at the rear of the Church buildings, and the new building was opened in may 1932 and included a large schoolroom (the upper hall), kitchen, toilets, senior classroom and five small classrooms.

The new block of buildings were requisitioned by the Military authorities in 1940 and so were out of bounds to the Church. The “Old” schoolroom and basement to that room were still open for Church use.  Later on in the War, the whole of the premises were placed at the disposal of the Civil Defence Controller for use in the event of a blitz.  It is fortunate that they never had to be used for this purpose.

German prisoners of war from the P.O.W. Camp at Boughton were invited to share Christmas services at Kingsthorpe in 1946 and 1947.

Soon after the end of the War, a scheme for renovation of the Church was started and in February 1949 two Memorial Windows, commemorating the dead of the Second World War were unveiled.

This year also saw the start of “Family Church”.  The Sunday School was changed from afternoon to morning, and the early part of the morning worship was adapted for children, and parents of the children were encouraged to attend Church with their children.

In 1961 plans were put in place to “modernise” the kitchen.  Those who are familiar with the Church will realise that the kitchen was completely re-vamped and the upper church rooms extended to include the small meeting room, toilets including a disabled one and an outside patio area.  This work was completed in 1991 and included a new entrance from Waitrose Car Park.

In 1973 the Church celebrated it’s “Ter Jubilee”.  A booklet containing this brief history was complied by Frank E Noon and Peter Valentine for this occasion.  Some 40 plus years later it is appropriate to quote a section from the booklet –

“The Church must look to the future now, she cannot afford to sit back and rest on her laurels.  Of course we cannot ignore the past, for in the past lie our roots, but we must not dwell there.  The great ideas and projects, the things to be done, all lie in the future.  We can be thankful for our past, for all those people who have served the Church faithfully over so many years and have left us such a firm foundation to build the future upon.  If the present Church is to leave as good a foundation for those who follow them, she must take every opportunity offered – indeed she must not wait until opportunities are offered – however small and seemingly insignificant, of fulfilling her expressed purpose of “encouraging, supporting and extending the cause of Christ at home”.